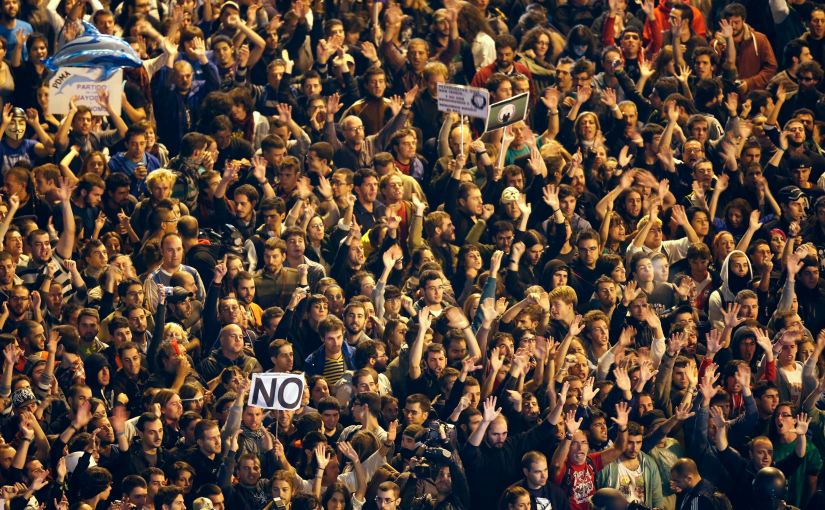 When I tell people I study religion, they usually assume I am a Christian (maybe the fact I’m always wearing a cross helps). Being in Quebec, Canada, which is a largely Catholic province, most people assume I am Catholic at first, to then be somewhat surprised when I say I am Protestant.

I am actually really proud of being Protestant, and I am usually asked what that means. What makes me a Protestant? The answer is really important for me, so I thought it’d be a good thing to write about here: Protestants… well, Protestants protest.

In Psychology, one of the main concepts that defines a well “evolved” mind is our sense of self-awareness: that we know we are thinking about ourselves. For example, when I say that I feel hungry, I am making a third-person statement about my self, acknowledging my own feelings from a distance, rather than simply feeling. However, even though most — if not all — people are self-aware, we are still very much bound to something called confirmation bias. Confirmation bias is the idea that when we believe something, we will usually interpret all events around us in light of our belief, rather than interpret our beliefs in light of the events. A naturalist may interpret a series of coincidences as merely random events that happened to align, while a more spiritual person will interpret them as Destiny, or the will of God.

A more real example: a young man is walking with “bad company” and becomes some form of criminal, but his mother is convinced that he is a good boy. She will likely interpret everything that happens to him as if he is the victim of the circumstances, or that things are not really what they seem like, because her belief, along with all the emotions, shapes the way she interprets everything regarding her son. She will rarely say “yeah, he is choosing to act that way. He is the bad company” because she believes he is a good boy inside.

Religious people (Christians too!) do a lot of confirmation bias. Your religion, after all, if you actually take it seriously, affects the way you understand the whole world. If there’s a Creator, everything is creation. If that Creator is good or bad or loving or nonchalant, everything will reflect that. Because we’re humans, and religion is largely human, we rarely question the whole thing. Tradition, or “the way we do it”, is possibly one of the hardest things to go against because it is so tied to the notion of identity. Not only religiously, but even in national, or tribal (family) levels, we all do it: “this is the way my people do it, and I will do it the same way“.

Being able to assess your own actions and filter your tradition, to do self-criticism, in a way, is a higher form of self-awareness. Don’t we all acknowledge that there is rarely anything harder, and wiser, than being able to say “I was wrong“?

At the same time, questioning your world view often shatters all of your sureties about life. It is really scary.

Protestantism started as a number of Catholic Christians looked at themselves, and their traditions, and questioned those traditions rather than affirm them: Is our tradition actually in line with what Jesus taught? Their criticism and protests asking for religious reform bothered the others too much, and they were cast out from the community.

The problem is that in the past four centuries, Protestants started their own traditions. We have so many denominations and confessions of faith that we look to and say “this is the right way“, but seldom questioning them. A baptist will stick to the baptist tradition and the Presbyterian will stick to the Presbyterian tradition and the Pentecostal will stick to the Pentecostal tradition. To booth, because they’re Protestant, they will often say they do not really have tradition, they are just following the bible — which is just not true. They are all interpreting the bible, and doing it differently from each other. That is the thing with written text: you cannot read without interpreting, and your interpretation is always affected by your tradition and a priori beliefs. Even atheists become stronger atheists after reading the bible. We need more than just reading and following it, we need to constantly be open to the possibility of maybe being wrong. I like to call it humility.

Nowadays I exercise my Protestantism from inside my own Protestant Evangelical tradition. What if we are wrong on a number of points? Why should we only listen to our own preachers and continually confirm our own beliefs, while neglecting history, science, and even other traditions, as we try to remain faithful to the teaching of the Apostles (the bible)?

I am a protestant Protestant.

Funny thought: Quebec, although historically being the Catholic province of Canada, is also known for being the province that protests the most.