So, I just turned 25, a quarter of a century. As a joke, a friend of mine gave me 25 cents in a card for my birthday. Just as it takes 4 of those quarters to make a dollar, it will take 4 times what I have lived to reach 100 years, an age that few see. In fact, even if I were to reach 100 years, life would still be short, a little more than 3 billion seconds—3 billion moments.

Though years and years had passed prior to my gaining consciousness 25 years ago, I was born unaware of the history preceding me– as we all are. I was thrust into a time and a place, though I had never chosen this. I was thrust from nonexistence into existence and allotted a period of consciousness, awoken into a world in which my life is but a flash among a series of flashes– here for only a moment, sojourning back to non-consciousness.

When I was younger– though I am still young– I subconsciously held a fallacious worldview, an underlying perspective that I never spoke of overtly, where I am the culmination of all that came before me, “the centre of the universe” and the centre of history. From speaking with friends, I have the sense that many of us have at some point thought this way: that our time is the plateau of history, or the “end times.” Though our time is certainly closer to the end than times before us, it is not as near as the times to come and the times beyond the times to come. I believe that this mistaken worldview, that our time is the centre of all times, is partially the result of a modernist society– a people proud of their vast, modern accomplishments and discoveries. No doubt, the speed at which discovery is occurring in our present age, and even the not so distant ages, is astounding, as is our collection of historical knowledge and the ease of access to said knowledge– yet we are merely a part of history, a part of the ebb and flow of time. Like the figures and persons we read about, we too will die, and someday others may read about us, only to die themselves and have others read about them.

This has been a part of my journey through consciousness, through life: that I too am a part it all; I am not the centre of the universe, and I am not a part of THE generation, the one I keep hearing about at Christian youth conventions. I am merely part of a generation, a generation that will pass away like the rest, slipping back to non-consciousness, awaiting what is to come.

I find it interesting, and quite informative, that one of the oldest textualized stories we have is the Gilgamesh Epic, a story of a king learning and accepting his own mortality. Like Gilgamesh, I too must accept mortality; I must accept that I will pass away, slipping into history.

Humanity has not changed at the core; we are still troubled and fascinated by the bizarity of our own existence, and many of us are unable to accept mortality. Many scholars, in fact, believe that this difficulty in accepting human mortality is responsible for the rise in beliefs concerning the afterlife, which began with Egypt and became popular towards the end of the first millennium BC (BCE). As a religious person, I have reservations with this naturalistic conclusion; for me, as with most religious developments, afterlife reflection is a result of revelation, the product of both natural and supernatural phenomena.

However, despite my faith in an afterlife (a future resurrection and judgment), I do not currently live there; I am here, now, in this existence; it is all I have. In this sense, I am somewhat of an existentialist, a Christian existentialist—which, in my opinion, is how I should live as a Christian, as though every day could be my last and with a humble attitude towards what I believe to be the meaning of it all. Perhaps tomorrow won’t be the end of all things, or perhaps it will, but it could certainly be the end of my own life. With 25 years behind me, I believe that the most important moment of my life is the only moment I will ever have: now.

But what do I know? I am but a passing consciousness, a 25 year old vapor, attempting to comprehend mysteries far beyond me, or any of us. 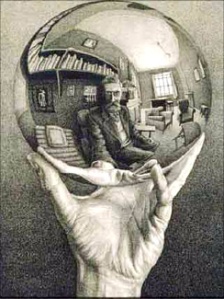 0 comments on “Birthday Reflections of a Christian “Existentialist””